It is the year 1.A.D. The beginning of time and a dawn of women and men. You are a group of cavepeople, taking your first steps into the unknown, primal, and savage world full of rival tribes, voracious dinosaurs, erupting volcanoes, on the eve of the Ice Age!

Explore the dangers of the early days of human history, complex political struggles within the first tribal structures, communication difficulties of the times-before-language, and the Ice Age driven economic impact caused by severe resource scarcity. All that and more on a one-page A4 document (or Letter if you're feeling really primal).

I felt compelled to let you know that 1 A.D. (Anno Domini = latin for: year of our Lord = As in Christ Jesus) which for context was during the rule of the Roman Emperor Augustus back when the Roman Empire control most of Europe. Yes, this was in fact the classical period. Also current year is A.D. 2021 (also written as C.E.) meaning A.D. 1 was exactly 2020 years ago. The stone age ended 3,300 B.C.  (Before Christ, also written B.C.E) B.C. dates progress backwards to the year 0 so bigger the number the further back you go.

Not trying to be mean. Just thought I'd let you know. I really like the concept of your game.

That's the entire joke, but thank you 😂 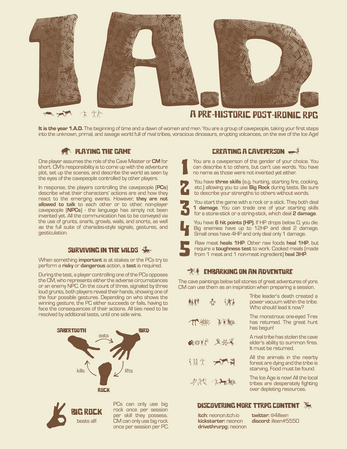